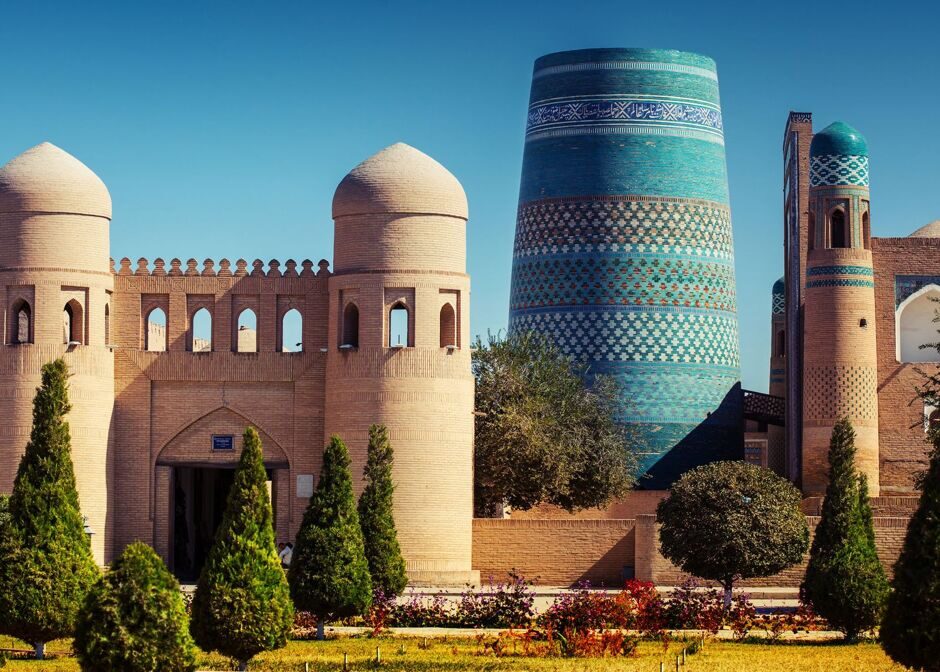 All fun included and most wanted activities

Arrival at the international airport of Tashkent. You will be met by the driver and transfer to the hotel. Breakfast at the hotel. After breakfast and some rest we visit Madrassa Kukeldash – the Complex Khast Imam, the religious heart of the city with the Barak Khan Madrassa, Kaffal Shashi Mausoleum, Mosque Djami and Local Chorsu Bazaar Market ‐ Bazaar is the heart of every oriental city, the center of public life, breadwinner of the whole city. Since the dawn of time bazaars appeared on the intersections of trade roads, on big squares of cities. On counters of this oriental Bazaar you will find fresh fruits, amber‐colored dried fruits, toasted Uzbek bread , fresh‐killed meat, kazy (horse meat sausage), and what not else. And all these things are so attractive that one can’t stand to pass by them and taste. Then we continue our tour in the modern part of Tashkent with the Panoramic view: Museum of Applied Arts, Independence Square, Amir Temur Square. The tour ends with the beautiful metro (underground) in Tashkent, where every station is decorated in various themes.
Overnight in hotel.
LUNCH at restaurant “Tv tower”. (20 USD per pax Not included in the price)
DINNER at restaurant ”Bek” with music and dance show. (12 USD per pax Not included in the price).

After early breakfast transfer to the railway station to catch the fast train “Afrosiyob” to Samarkand (300 km and it takes 2 hours and 20 minutes). Arriving in Samarkand at 10:30 am. We start our excursion with the magnificent Registan Square with three Madrasses completely covered with tiles and mosaics of lapis. Lazuli is one of the most extraordinary monuments of Central Asia with the Ulugbek Madrassa, the Sher Dor Madrassa and Tilla Kari Madrassa that are followed by the giant mosque Bibi Khanum built by Amir Timur for his favorite wife. After visiting the giant mosque of Bibi Khanum. We will have a free time for shopping in the Siyab Bazaar. Today the Siyab bazaar ‐ the city’s biggest and the most ancient market. It welcomes the customers with abundance of fruit and vegetables growing in the fertile of Zarafshan valley. Pyramids of water‐melons and melons, bags with walnuts, seedless raisins and dried apricots, bunches of grapes and alluring piles of figs attract the visitor with sweet tooth. Red apples and sweet‐scented pears lay on counters next to leathery fruits of a pomegranate. The air is fragrant with a strong smell of spices ‐ pepper and saffron, cardamom and nutmeg, zeera (cumin) and caraway seeds.
Lunch in national restaurant with local people. After lunch transfer to the hotel and check‐in. After a check – in the hotel we continue our tour with the Museum of Wine making at Khovrenko Winery. The winery has an interesting wine museum, which familiarizes the visitors with its history as well as that of Samarkand wine making, its international awards and, of course, arranges tasting of Samarkand wines. (12 USD per pax Not included in the price).
Visit the Mausoleum Guri Emir, the mausoleum of Amir Timur familial with its beautifully fluted dome.
Dinner at restaurant with dance show. Overnight in hotel.

After breakfast we go to one of the nearby villages to watch Buzkashi horse riding game (Note: This play is available to watch during March and October and November ), which literally means ‘goat fetching,’ is a traditional horse game of the steppe nomads in Central Asia. It has been played since the epoch of Genghis Khan, the 12th‐century ruler of the Mongol Empire, and variations of the game are popular in Tajikistan, Kyrgyzstan, northern northern Pakistan and Kazakhstan, as well as in Uzbekistan, where, having first found followers in rural villages, it is today a celebrated national sport. Buzkashi competition is fierce. It’s the kind of sport that requires dexterity, courage and force from the athletes, while also presenting a fantastic and fascinating show for spectators.
After the performance we have lunch and leave Samarkand and start our way to Nuratau Nature Reserve. We take a break from the architecture, and spend one night in the Nurata region Yurts ‐ decorated with hand made carpets and sherdaks (felt rugs) of local craftsmen, where you will have a jolly night enjoying dancing around the fire at night.
Dinner. Overnight in Yurts Camps.

In the Morning after breakfast you we have our most wanted camel riding in the vast desert like an ancient Caravans did on the Great Silk Road (10 USD per p. Not included in the price).
Then will have an unforgettable excursion to Aydarkul Lake, which is also known as "geographical miracle" that formed in the waterless desert. Watch the rich aquatic bird life, swim or just stroll along the lakeshores. Picnic lunch with fresh fried fish from the lake. Dinner at the Yurt camp with delicious food cooked on Saksaul tree.
Overnight in yurts.

After breakfast drive to Bukhara via the town of Nuratau where we visit Chashma complex, including pool with holy fishes and ruins of ancient citadel and continue our way to Bukhara (280 km). On arrival in Bukhara check‐in the hotel and have a shower after a long trip in the desert part of our tour. Lunch at a local restaurant. After lunch you will have short excursion through the old city, visit Ark Fortress, the Mausoleum of Tchashma Ayoub, Mosque Bolo Khaouz "mosque over the bath", mausoleum of Ismail Samanid.
Dinner at restaurant . Overnight in the hotel.

After breakfast we leave for Khiva, the route crosses the desert Kyzyl Kum "red sands", the road that skirts the edge of the large bed of the river Amu Darya, whose dry offers stirring views of unusual beauty. During the journey stops are scheduled for lunch and short walks for taking photos at an impressive place in the middle of the “Kizil Kum desert” Then continue the way to Khiva. Arrival in Khiva and check in hotel. Free time for rest and wash. In the evening we go to Uzbek wedding party (Included in the price) where you will have a chance to enjoy a real Uzbek wedding party with different customs and tradition of Uzbek people.
Overnight in hotel.

Breakfast at the hotel. The day will be dedicated to visiting Khiva. “Ichan Kala”, its old town dating from the fifth century BC was declared a World Heritage Site by UNESCO. The excursion starts from the West Gate Ata Darvaza, the statue of the great scholar Al‐ Khorezmi (Algorithme), founder of algebra; Complex Muhammed Aminkhan (XIX s) with the Madrassa Aiminkhan and Kalta Minor Minaret, the Fortress Kunya Ark, the residence of local rulers with the Reception Hall, the Royal Mosque, the Harem, the Old Prisons, etc., Mosque Djouma (x, s) is the most beautiful Friday Mosque of Khiva from the 213 carved wooden columns. Lunch at café “Zarafshon”. After lunch visit the Palace Tash Khovli, the second residence of the rulers of Khiva with the Harem, the Mausoleum of Pahlavan Mahmud, poet, philosopher and legendary wrestler, patron saint of the city, one of the most sacred and beautiful of Khiva, the Royal Caravanserai with its fascinating bazaar and just from this sight you may have a free time for walking and shopping in a Local Bazzar in Khiva.
Dinner at restaurant. After dinner we will go to Mukhammad Aminkhan Madrassah to watch folklore show and dance for jolly Khorezmian music “Lazgi” (10 USD per pax, Not included in the price). After the folklore show you will have a chance to feel the charming Khiva night walking. Overnight in Khiva.

Breakfast and transfer to Uzbekistan ‐ Turkmenistan border point. Border formalities on both sides. You will be met by the driver and the guide with Jeeps in Turkmenistan part and transfer to Kunya Urgench. A short ‐ sightseeing tour of the historical places of "Kunya‐Urgench" as Mausoleum of Sultan Tekesh, The monument of Sultan Tekesh is located in south‐eastern part of Kyrk Molla fortress. People call this monument mausoleum of Il Arslan. Mausoleum of Torebeg Hanum. This historical monument, built for the honor of Torebeg Hanum, is located in the north of ancient Gurgench. Lunch at a local cafe. Then drive to Derwaza where the famous Gas Crater ( The Door to Hell) is situated (270 km ). In Derwaza deserts we make a Jeep safari tour on the vast sand (Included in the price). The Derwaza area is rich in natural gas. To avoid poisonous gas discharge, it was decided the best solution was to burn it off. Geologists had hoped the fire would use all the fuel in a matter of days, but the gas is still burning today. Locals have dubbed the cavern "The Door to Hell".

Sightseeing famous Gas crater is nowadays is a very interesting place for tourists where they can have a night in tents, you can have a lot fun there dancing, singing and cooking delicious picnic meals like Shashlik with fresh meat for dinner and make your picnic even more interesting. (Included in the price).
Rest & night in tents near crater or overnight in Yurts.

Breakfast in the hotel.
Transfer to the International Tashkent Airport to catch return flight to Homeland with great expressions!!!

Hotel Zarina 3* or Ideal 3* or similar